Travis 'A Ghost' by Fran Healy

It is not unusual, of course, for artists to direct their own videos. But to draw and animate their own videos? That is a different matter. However, Fran Healy of Travis has done just that, and has created a remarkable work of committed creativity - with just a little bit of crucial help from family members.

The video for A Ghost - the first single from the band's forthcoming ninth studio album, 10 Songs - was on the drawing board back in March, when the pandemic crisis scuppered the possibility of a conventional shoot. As he moved into isolation with his family at their home in Los Angeles, Healy quickly took matters into his own hands: deciding to createa nanimated video for the track, by drawing out each frame himself.

With a mixture of realism and fantasy, the Travis frontman takes a trip around the city with a gang of friendly ghosts. The simplicity of the story and style both allows Healy's skill as an illustrator to shine, and to dovetail with the final section of the video, where live action takes over.

And here, Healy performs with his ghost friends in a classic band set-up, in a deserted LA back lot. This lockdown shoot was a family affair, which was shot by his 14 year old son Clay, who looks like he has a future in cinematography. And Nora Kryst, Clay's mum and Fran's partner, was also on duty as makeup artist. A wonderfully uplifting family affair.

In an act of desperation, I decided to draw the video.

"The video for A Ghost started out as a mocked-up picture of me and three ghosts playing the last chorus of the song in a deserted alleyway. It looked cool so I took that image and back-engineered a story out of it. Just when everything was ready to shoot, the world went into lockdown. So we had this great song with no way to make a video.

"Frustrated and in an act of desperation, I decided to draw it. I did a test to calculate how long it might take me: 16 hours for each 10 seconds of footage. It worked out that it would take around 30 days, which landed exactly on the deadline date. So I drew and drew and drew and drew. 2,500 drawings later, it was done.

"One day, I was watching a sequence back and when it got to the end of what I had drawn, it flashed and went into live action. It looked great. This was the moment I realised I could shoot the mock up picture of me playing with my band of ghosts in the alley way. This helped in 3 ways:

1. Filming the last 47 seconds would save me 10 days of drawing.
2. I could recruit my 14 year old son, Clay as the cameraman. He has a drone camera so could shoot it remotely and could use it as part of his school video project
3. Most importantly, we could film it socially distant.

"It was the most bizarre video shoot I have ever worked on. You realise how important proximity is to getting things done when it's taken out of the equation. But we did it and it turned out great. Clay has to wait till we release the song to hand in his video project." 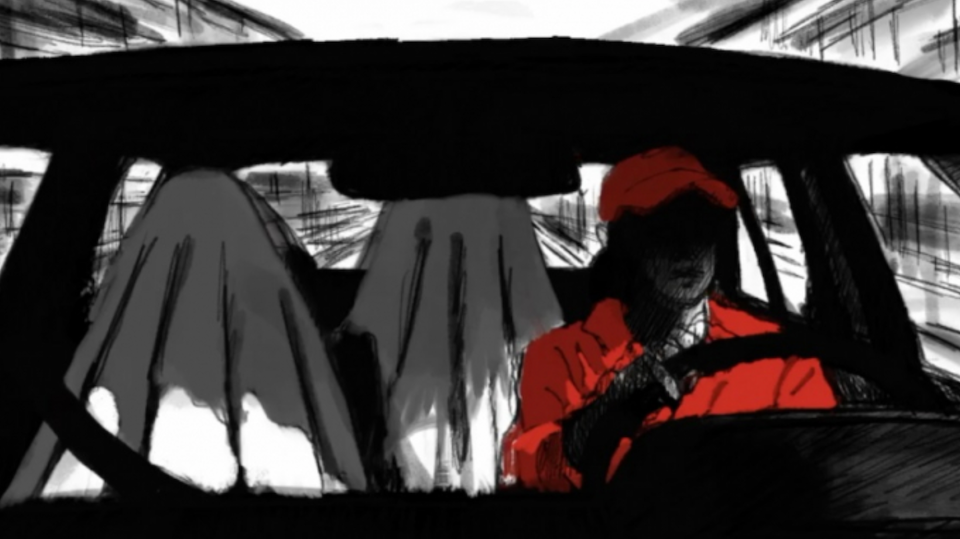